Nan Nan Bunnie knew clothes. She especially knew buttons. Her nickname was Button Bunnie. Designer bunnies from all over the world called on her to choose the buttons they put on their clothes. She traveled far and wide in search of the most spectacular buttons the world had to offer.

The coat that Nan Nan Bunnie gave to Bunnie was pale pink, the very color of  the insides of her ears and her little twitching nose. It also had five very special buttons sewn right down the front, each one unique in its own way.

Nan Nan Bunnie had explained to Bunnie that if she pressed a button on her coat, something rather unusual would occur. But Nan Nan Bunnie wouldn’t say more. She simply left Bunnie with her new coat and hurried out the door back to her busy life in New York.

As soon as Nan Nan Bunnie was out the door, Bunnie put on her new coat and examined each button, being careful not to push them just yet.

The top button was a shiny affair, clear like a diamond, but filled with a myriad of colors. Bunnie wondered if it was, in fact, a real diamond.

The next button wasn’t shiny at all. It was quite simple. It was round, white on top, but when Bunnie lifted it to see the back, she saw that the back of the button was black. Very, very black. It was… cool.

The third button nothing special to look at. It was just a big, plain, pale blue, plastic button like the ones Mummie Bunnie had on her doctor coats. It wasn’t a fancy button, but it had an important air about it.

The fourth button was a navy blue oval button with what looked like a planet etched on it: a circle with a ring around it. To the touch, it felt almost like a rock.

The fifth button was the fanciest of all. It was embroidered with flowers and embellished with jewels.  The threads were royal purple, moss green, deep red, glistening black, shimmering gold and midnight blue. Each thread color had a corresponding jewel: an amethyst, an emerald, a ruby, an onyx, a citrine and a sapphire.

Bunnie was impressed. She was ready to press her buttons.

She buttoned up her coat, stood a little closer to the mirror and pressed the very first, very shiny, diamond-like button. It was cold! Suddenly Bunny was cold all over. She looked around her and all she could see was white. White trees, white mountains and a clear, crystal blue pond all around her. Bunny looked down and saw that she had ice skates on her feet and that her pink coat had turned all white and furry with five diamond-like buttons running right down the front of it. She touched the top button again and realized that the buttons were made of ice!

Bunnie skated around the pond and before long she had icicles forming on her puff-ball tale and she knew it was time to go home. But which way was home? She had no idea where she was!

She pressed the icy top button once again and closed her eyes. She hoped that it would transport her back to her room! She was very interested to see where all her other buttons would take her.

Sure enough, in a blink of an eye, Bunnie was right back in her room, standing in front of her mirror. Bunnie immediately pressed the white button with the black back.

Suddenly Bunnie was dressed in a white button down shirt, a black skirt and black high heeled, lace-up booties. She saw her reflection in the enormous window in front of her and she saw that she was wearing red lipstick! And black-rimmed glasses! Bunnie looked very smart indeed.

All around her were windows and paintings. Loads and loads of colorful paintings. Bunnie was in an art gallery. Nan Nan Bunnie was always taking her to galleries like this in New York City. She walked around and admired the beautiful works of art. There were lots of works with slashes of color running through them. They looked very much like the paintings Bunnie made at school. Perhaps one day she would be an artist and her works would hang in a gallery just like this one.

After Bunnie had seen each painting, she pushed the white button with the black back and she was once again back in her room. She wasted no time and firmly pressed the third, pale blue, plastic button and closed her eyes.

When she opened her eyes she was at a hospital! She was wearing a light blue doctor’s coat just like Mummie Bunnie’s. She had a stethoscope around her neck and a pen in her pocket. She was carrying a clipboard. Nurses were buzzing about putting bandages on boo-boos and taking patients’ temperatures. Everyone was helping everyone else. It made Bunnie’s heart feel warm. Bunnie wrote a few notes on the pages of her clipboard and looked around. Everything was under control, so she pressed the plastic button on her coat and closed her eyes.

Back in her room once again, Bunnie was very interested to see what then next, navy blue, planet button would bring. She gave it a push and she suddenly felt as light as air. Bunnie was floating in space! She was an astronaut inside of a spacecraft! She had on an all-white space suit, with one navy blue button on the sleeve. She recognized that button. She looked up and she was peering out of a small window. And what did she see? It was Saturn with its firey ring blazing around it. Wow!

Bunnie did a few floating flips and remembered the beautiful last button on Nan Nan Bunnie’s pink coat. She had to see where that one would take her, so she pressed the navy blue button on her sleeve and she was back in her room.

She eyed the fancy, embellished button with all the tiny jewels stitched on it. She pressed it and held her breath. When she exhaled, Bunnie was sitting on a thrown wearing the most lavish gown she had ever seen! It was embroidered with the same golden threads as the button, laced with the rich, jewel-toned fibers and, from the weight she could feel pressing down on her head, she knew she was wearing a crown. She reached up and lifted it from her head so that she could have a look. The crown was completely encrusted with jewels! It twinkled so bright that Bunnie had to squint her little eyes to see all the beautiful jewels that were set into it. Wow! Bunnie thought. Wow!

Bunnie danced around and around the grand ballroom until her bunny legs couldn’t dance any more. The only problem was that Bunnie hadn’t seen the button she had pressed to get into the ballroom in the first place. Her royal dress was so extravagant and had so many details that the button was lost in it. How would she ever get home? She was too small to run a kingdom! Whatever would she do? There weren’t any telephones in the castle to call Nan Nan Bunnie… she would just have to search her dress.

Bunnie ran to a gilded mirror in the corner of the ballroom began to look for the button. She searched the pleats of her dress. Nothing. She inspected her crown. All jewels, no buttons. She ran her fingers over her lace collar. Not a single button!

Bunnie plopped down on the floor. She missed Mummie Bunnie. She missed her room. Her tummy was grumbling. Bunnie was hungry! She hadn’t had a bite to eat since she put on Nan Nan Bunnie’s magical coat.

Bunnie began to cry. As a tear ran out of her eye, she noticed something glimmering on her foot. One of her fancy shoes was poking out from the layers and layers of her dress. And what should be sewn onto the shoe, but the fancy button from Nan Nan Bunnie’s coat!

Hooray! Bunnie reached down, pressed it and closed her eyes. When she opened them, she was right back in her room, looking at herself in her mirror, her new pink coat and its five miss-matched buttons seemed very plain compared to her previous queen’s attire.

Bunnie carefully unbuttoned her coat. She didn’t want to accidentally press a button and find herself back in one of those exciting places. The only place Bunnie wanted to be was in the kitchen with Mummie Bunnie! She put the coat into her closet and ran right down the stairs.

“Where have you been, my little Bunnie?” Mummie Bunnie asked.

“I’m going to button my lips!” Bunnie laughed. “You wouldn’t believe me if I told you!” 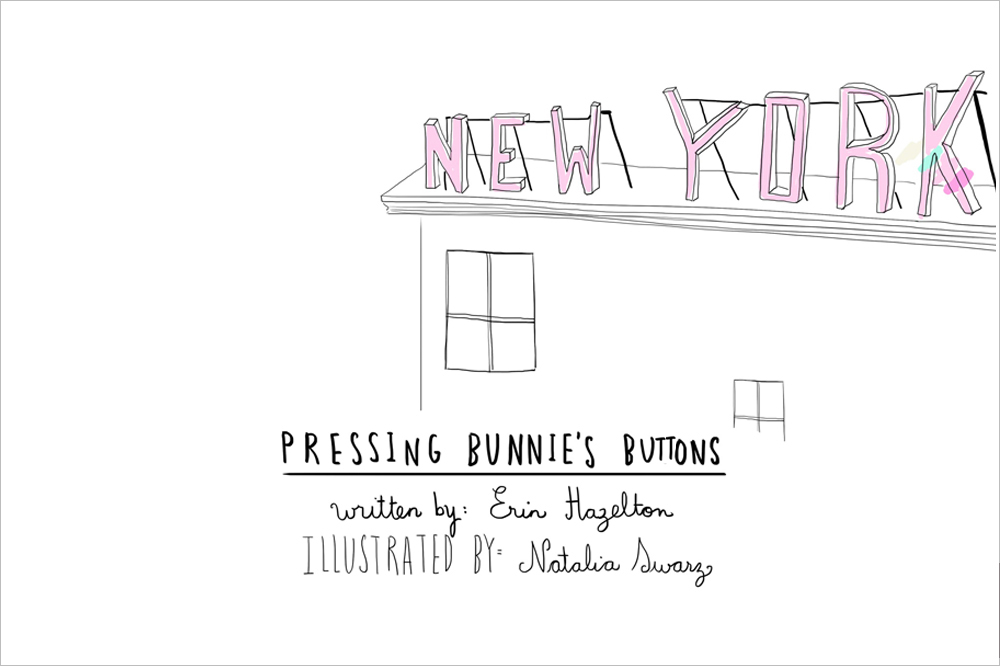 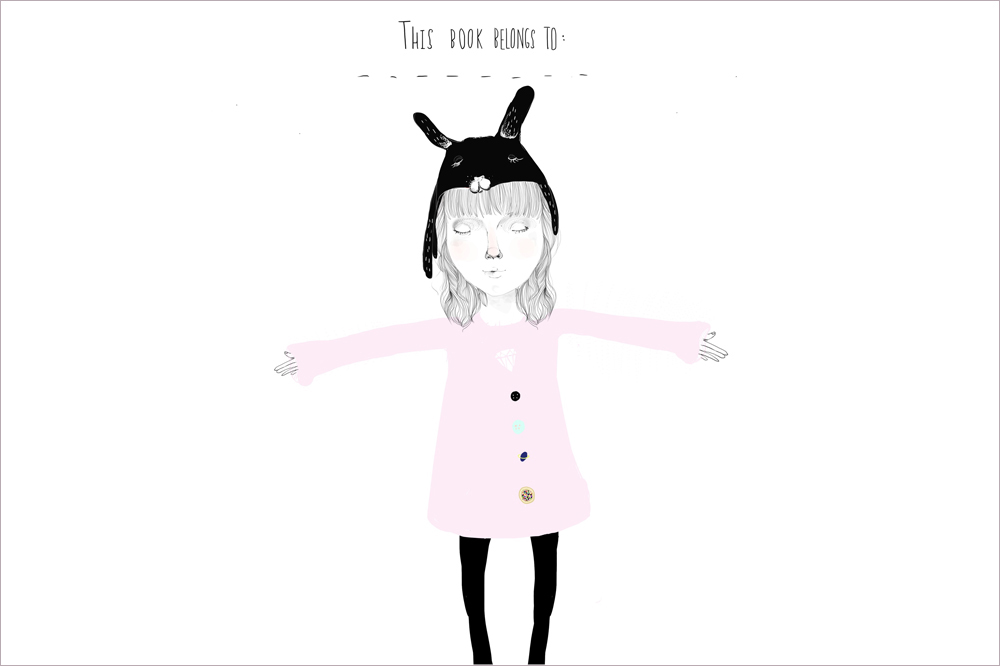 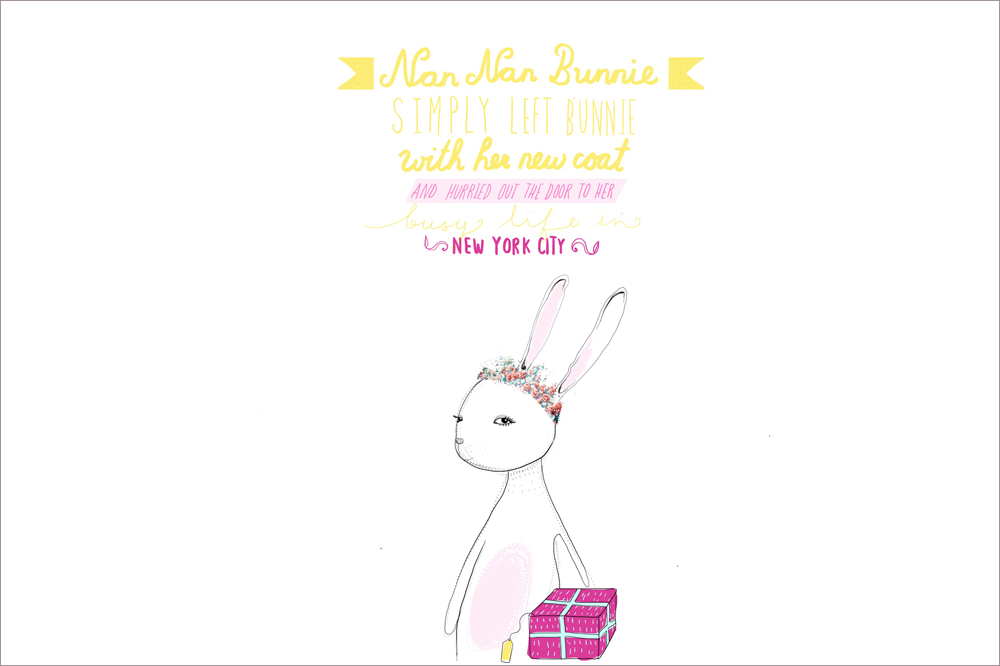